What is a laser cutting machine and how does it work

The laser light is generated by a laser resonator, which emits a strong beam of light, which is reflected by the mirror system onto the cutting head. The laser is focused by a lens in the cutting head and narrowed into a very thin concentrated beam. 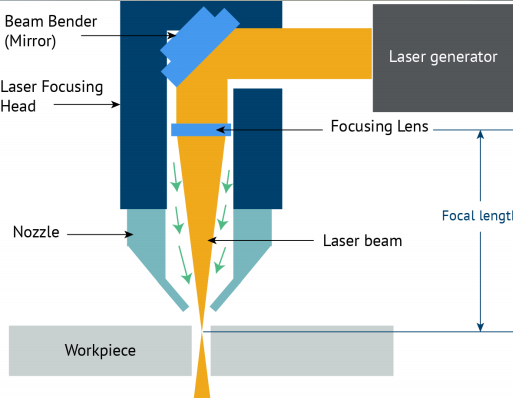 Due to the optical system consisting of mirrors and lenses, the beam is projected down onto the material for cutting.

The active laser medium can be:

•Solids, such as crystals.

•Mixed composition. Oxygen is the most common type, a mixture of carbon dioxide (CO2);

•Fiber, most of the time it is glass fiber.

The laser resonator generates energy at the beginning of the beam.

• Luminous, thanks to diodes or lights;

When the resonator generates laser light, the mirror guides the beam in a specified direction, and the lens focuses it on the necessary position. Crystals or gases help to more precise direction and amplify the laser beam. Focusing also doubles its cutting ability. Most laser cutting machines use capacitive height control to maintain a precise gap between the workpiece and the nozzle end, which is the exit point of the laser beam. The gap determines the cutting quality.

The laser cutting machine cuts due to melting, vaporization or burning. Compressed gases such as oxygen and nitrogen are also discharged from the nozzle end and flush the molten debris away from the slit.

The laser cutting machine system can be:

•Gantry system, the laser beam is always perpendicular to the cut material is passed to the plotter associated with the three mirrors: One fixed mirror and two moving mirrors.

• Galvo system, the laser beam is placed at different angles. Use a bevel mirror to glue it to the material. Up to 1 meter Per second, but the system is mainly used as an engraving tool. Because it does not provide a neat appearance. Laser beam placed in the center of the device and oriented through the mirror Material and reduce deviation. Especially if the object is very wide, Keep the edge away from the laser beam.