Laser cutting speed is high, the slit is narrow, the heat affected area is small, the edge of the slit is perpendicular, the cutting edge is smooth, and there are many types of materials that can be laser cut, including carbon steel, stainless steel, alloy steel, wood, plastic, rubber, cloth, quartz, ceramics, glass, composite steel, composite steel, Laser cutting technology has been widely used in vehicles, machinery, power, hardware, and electrical equipment with the rapid growth of the consumer economy and the rapid development of science and technology.

The beam is directed by the lens of the cutting head onto a small focal point during the cutting process of the laser cutting system, so that the focal point can achieve a high power density, and the cutting head is fixed on the z-axis. At this time, the beam's heat input greatly exceeds the portion of the material's heat reflected, conducted or diffused, and the material is rapidly heated to the temperature of melting and vaporization. A high-speed airflow from the coaxial or non-coaxial side can melt at the same time. 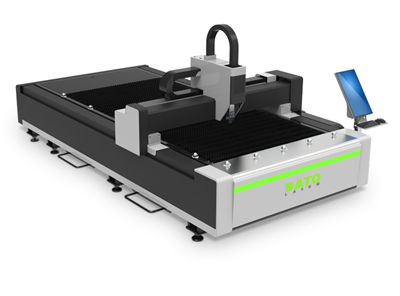 Laser, like other natural light, is a kind of light produced by the transfer of atoms (molecules or ions, etc.). But it is distinct from ordinary light in that, for a very short period of time, the laser relies only on spontaneous emission and the subsequent phase is totally determined by the excitation radiation. The laser has, therefore, a very pure hue, virtually no divergence, and an exceptionally high intensity of light. And elevated coherence.

By applying high power density energy produced by laser focusing, laser cutting is achieved. The laser is discharged by pulses under the guidance of the machine to send out a regulated repeated high-energy pulsed laser to form a beam with a certain frequency and a certain pulse duration. The optical path is directed and mirrored by the pulsed laser beam and centered by the focusing group of lenses. A small, high-energy-density light spot is formed on the surface of the processed object. The focal spot is located near the surface to be processed and at an immediate high temperature melts or vaporizes the processed material. A tiny hole sputters instantly on the surface of the target with each high-energy laser pulse. The laser processing head and the applied material conduct continuous relative motion in conjunction with the pre-drawn graphics under machine control, so that the object is processed into the shape you like.

The process parameters (cutting speed, laser strength, gas pressure, etc.) and the direction of motion during splitting are controlled by the numerical control system and a certain auxiliary gas pressure is blown away from the slag at the break.

To force the molten material to exit the kerf, the laser beam is mixed with high-purity inert cutting gas, and the gas itself does not engage in the cutting. Cutting laser melting can have a higher cutting speed than cutting gasification. Usually, the energy needed for gasification is higher than the energy needed to melt the material. The laser beam is only partly absorbed during laser melting and cutting. The maximum cutting speed increases with the increase in laser power and, with the increase in sheet thickness and material melting temperature, decreases almost inversely. The limiting factor for a certain laser power is the air pressure at the break and the material's thermal conductivity. Oxidation-free incisions for iron materials and titanium metals can be obtained by laser melting and cutting. For steel materials, the laser power density that causes melting, but not gasification, is between 104 W/cm2 and 105 W/cm2.

Inert gas is commonly used for melting cuts. The substance is ignited under the irradiation of a laser beam if it is replaced by oxygen or other active gases, and a fierce chemical reaction with oxygen produces another heat source, called oxidative melting cutting, to further heat the material.

Because of this effect, the cutting rate that can be obtained by this method is higher than that of melting cutting for structural steel of the same thickness.On the other side, in contrast to fusion cutting, this technique could have poorer cut efficiency. It actually produces wider slits, apparent roughness, increased heat-affected area, and worse quality of the edge. Laser flame cutting is not pleasant when precision models and sharp corners are processed (there is a danger of burning off the sharp corners). To minimize the thermal effect, a pulsed laser may be used, and the laser's power determines the cutting speed. The limiting factor in the case of certain laser power is the availability of oxygen and the material's thermal conductivity.

The high energy intensity of the beam, usually 10W/cm2, is one of the advantages of laser cutting. As the energy density is inversely proportional to the area, the diameter of the focal spot is as small as possible to create a narrow slit; at the same time, the diameter of the focal spot is also proportional to the lens' focal depth. The smaller the focusing lens's focal depth, the smaller the focal spot diameter. There are spatters in the cutting process, however, and the lens is too close to the workpiece to damage the lens. The focal length of 5"~7.5" (127~190mm) is also commonly used in industrial applications of high-power CO2 laser cutting machines in general. The actual diameter of the focal spot is 0.1~0.4 mm. The successful focal depth for high-quality cutting is often connected to the diameter of the lens and the material being cut. For example, with a 5-inch lens, cutting carbon steel, the focal depth is within +2% of the focal length, which is around 5 mm. It is therefore very important to monitor the focus location relative to the surface of the material being cut. Taking into account factors such as cutting quality and cutting speed, the focus is on the surface, in principle, 6 mm metal materials; 6 mm carbon steel.

1.The scale of the laser generator's laser agglomeration. The cutting accuracy is very good if the light spot is very small after selection, and the distance after cutting is also very small. It demonstrates that the laser cutting machine's accuracy is very good, and the efficiency is very high. The beam produced by the laser, however, is cone-shaped, so the slit cut out is cone-shaped as well. Under this condition, the greater the workpiece thickness, the lower the precision, so the larger the slit.

2.The workbench's precision. If the table precision is very good, the cutting precision will also be increased. Therefore, to calculate the accuracy of the laser generator, the precision of the workbench is also a very important consideration.

3.It condenses the laser beam into a cone. The laser beam is tapered downwards when cutting. At this time, the cutting precision will be decreased if the thickness of the cut workpiece is very high, and the cut distance will be very large.

The laser cutting machine device normally consists of a laser generator, a part (external) beam transmission, a workbench (machine tool), a numerical control cabinet for the microcomputer, a cooler, and a computer (hardware and software).

1.The main machine component of the machine tool: the laser cutting machine's machine component, the mechanical element that understands the movement of the X, Y, and Z axes, including the frame for cutting work. It is used to position the workpiece to be cut and, normally operated by a servo motor, can shift correctly and accurately according to the control software.

2.Laser generator: A device which generates a source of laser light.

3.External path of light: refractive mirror, used to guide the laser in the direction needed. All the mirrors must be covered by a protective cover to prevent the beam route from malfunctioning, and a clean positive pressure protective gas is introduced to protect the lens from contamination.

5.Stabilized power supply: the laser, the CNC machine tool and the power supply system are connected. In order to prevent external grid interference, they mainly play a role.

8.Water chiller: used for cooling the head of the laser generator and laser.

The application of metal laser cutting machines is very extensive, covering many industries, and for many companies it is one of the required equipment, including the production of advertising signs (these are mostly stainless steel LOGO and logo cutting), sheet metal processing (sheet metal processing essentially involves all metal materials. These are bending, polishing, etc. in general, and cutting is the cutting, the company's laser cutting machine setting was also involved in the development of the Seven Gods Eight Spacecraft, which actually includes different elements. The mechanical machinery casings and kitchen utensils (mostly stainless steel) that exceed lasers. It is commonly used in sheet metal manufacturing, production of advertising signs, production of electrical cabinets of high and low voltage, mechanical components, kitchenware, cars, machinery, metal crafts, saw blades, electrical parts, glass industry, springs, circuit boards, electrical kettles, medical microelectronics, hardware, knife measuring tools, and other industries.

1.Laser engraving: It is predominantly performed on the object's surface, divided into two types: bitmap engraving and vector engraving:

2)Vector engraving: Use vector software such as Coreldraw, AutoCad, Illustrator and other typesetting designs to export graphics to PLT, DXF, AI format, labeling machine, and then use special laser cutting and engraving software to open the graphic file and send it to the machine for laser engraving processing.

It is primarily suitable for processing wood, two-color boards, plexiglass, colored paper and other materials in the advertising industry.

2.Laser cutting: as the separation of edges, we can grasp it. We should first render graphics in the form of vector lines in CORELDRAW, AUTOCAD, pneumatic marking machine for such processing purposes, and then save the corresponding PLT, DXF format, use the operating software of the laser cutting machine to open the file, according to our The processed material can be controlled after setting parameters such as energy and velocity. After receiving instructions from the computer, the laser cutting system will automatically cut according to the flight path that the program produces. For example, according to the computer, the current laser cutting system will draw a template and then input the computer directly to automatically cut the graphics. Generally, the existing laser cutting system has its own hard disk, which can input large sources of data.